“A coat of arms set into a wall on Southwood Lane, a gate post with half a link-light holder, a reburial of a poet, from a school to a church, archaeology in Highgate woods – there were many odd things for me to understand as a school boy at St Michael’s Primary in the late 1940s.

It has taken me a long time to unravel some of the stories that make Highgate such a fascinating place. I have learned that the arms were given to the man who saved the life of Robert the Bruce, then living on what is now Highgate golf course.

The gate post is a remnant of the house of General Wade, the man who ‘pacified the Highlands’ after the ’45. The reburied poet was Samuel Taylor Coleridge, author of ‘The Rhyme of the Ancient Mariner’, and the archaeologists were uncovering the kilns of itinerant Roman potters.

Since then I have discovered further fascinating links to Highgate’s past – including the first house owned by a Jewish family after the Cromwellian re-admission, the house where Nell Gwyn gave birth to a son of Charles 1st, and the school which John Betjeman, Stephen Hawking, and Elizabeth Taylor all attended (not at the same time!).  And the stories are not over!” (Peter Walton)

Throughout the Festival, look out for little boards, some with QR codes. 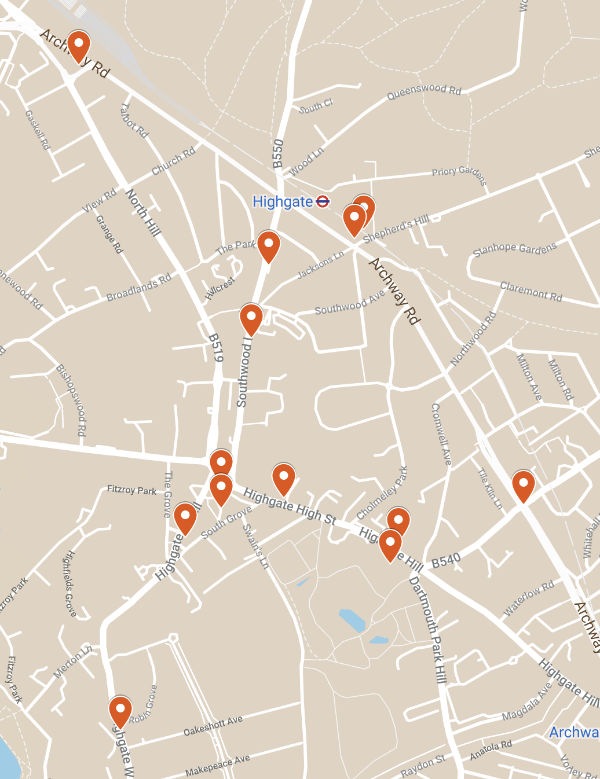 Not just a tea room, the Raj was also a B&B, an outlet for amateur artwork, a venue for musicians to perform, somewhere for Highgate boys and Channing girls to socialise, a place to find welcoming company and for lost souls to be given encouragement and opportunity to get back on their feet.

Built in 1637–8 for the city merchant Richard Sprignell, this Grade 1 listed house was the first in England owned by a Jewish family after the Cromwellian re-admission. It was bought in 1675 by Alvaro da Costa, a Portuguese courtier in the service of Queen Catherine of Braganza, the wife of Charles II. Alvaro’s monogram survives on a marble plaque above a fireplace in the room over the carriage arch.

On 6 July 1837, just three weeks after her accession, Queen Victoria was travelling by carriage down West Hill.  Arriving outside the Fox and Crown public house, her horses became agitated, and “set off at a fearful pace”.

By the late 18th century the steep hills of Highgate – the main route to London – were becoming difficult to negotiate for the heavier wagons needed to move materials needed for the Industrial Revolution taking place. There was also an increase in the driven cattle passing through the village to feed the growing population of the capital.

The Flask is first recorded as a pub of that name in 1716, and it is thought that Dick Turpin (1705-1739) , the famous highwayman, stabled his famous horse Black Bess there. He is said to have ridden Black Bess the 200 miles from London to York, in one (very long!) night, to escape capture for a murder he may have committed. He was however captured in York, and executed by hanging.

A track in the woods

If you go down to the woods in Highgate you’ll get an almighty surprise. Jess (Fyrenforth) and his mates, with a little help from the Muswell Hill Crew, have built a working BMX track within yards of the road. Outside suburban London carries on as normal, but once you’re into the trees BMX is King.

Francis Bacon, Lord Chancellor of Great Britain, taking the air in Highgate, snow lying on the ground, and it came into my lord’s thought why flesh might not be preserved in snow…

Rod Stewart was born on 10 January 1945 in the house which stood at this site, No 507 Archway Road; he has reported a “fantastically happy” childhood here as the youngest of five children. His father was a builder before buying a newsagent further up the Archway Road when Rod was in his teens; the family lived over the shop and Stewart often worked as a paper delivery boy.

The Lauderdale chicken has a piece of egg shell attached to its rear, indicating that it was alive when it was sealed inside the chimney recess and laid an egg before it died.

This gatepost, with half a link-light holder still in place, marks the entrance to the long-demolished house of General George Wade (1673–1748), the man who engineered 250 miles of military roads through the Highlands of Scotland.

The Bruce family were local, and owned one-third of the manor of Tottenham. In 1305 Robert the Bruce was living in the Earl of Gloucester’s lodge, on what is now the 12th green of Highgate Golf course. The king, Edward 1, became suspicious of the nationalist intentions of Bruce and made known to his court his intention to seize him.

Oh the after-tram-ride quiet, when we heard a mile beyond,
Silver music from the bandstand, barking dogs by Highgate Pond;
Up the hill where stucco houses in Virginia creeper drown
And my childish wave of pity, seeing children carrying down
Sheaves of drooping dandelions to the courts of Kentish Town.

Coleridge came to stay for a month in 1816, and never left. Eventually the Gillmans had to move to a bigger house because of him! And there he stayed until his death in 1834.

Dunn’s Chemist: A scruple of morphium

In April 1816 the poet Samuel Taylor Coleridge came to Moreton House (14 South Grove) – home of Mr Gillman (surgeon) and his wife Anne. He intended to stay for one month in the hope of breaking his opium habit under Mr Gillman’s supervision. Seven years later Coleridge was still there.

Any pedants travel on the Northern Line?

…and feel like screaming every time the woman making those automated announcements says ‘The next station will be Highgit’. Have you ever heard anyone else, ever, pronounce Highgate as ‘Highgit’? Ever? No! Of course you haven’t. It’s wrong. And it does my head in. Rant over.”